Where the Big Boys Play

The Granville Bridge Route and the River Road/Campus Route are two good before work routes since I can ride each in less than an hour. Unfortunately, I seem to be falling into a bit of a rut. (I could probably design a new route using 400W or Klondike Road with a similar distance. I’ll work on that.)

This morning, I took the Campus route again, and I brought the camera along to get a shot of the trombones I saw yesterday. No such luck.

However, as I circled around Ross-Ade stadium, I noticed that one of the gates had been left open. So, I rode into the stadium up to the seating area. I snapped several shots of the empty seats. 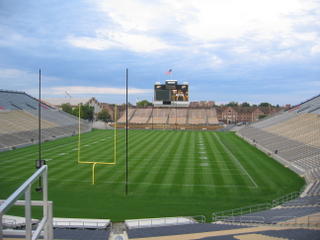 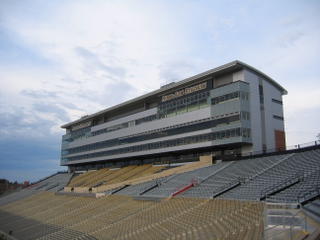 Pavilion
Later in the morning, I was in a meeting being held in the Shivley Club (the first visible level of the pavilion). The team was having practice on the field. At lunch, we watched the groundskeepers fill the divots, roll the bumps, and mow the grass.