Before my family moved west, we lived on the south side of Lafayette for 12 years. It was around the time that the 350S bypass was built and Poland Hill Road was upgraded that I started biking. I was driving through there the other day and thought it would be fun to ride the old routes. 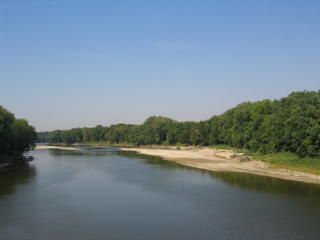 Wabash River
I started today by taking River Road east to US231 and the Brannigan Bridge. Although it is a busy road, the “new” 231 is a fairly easy way to get across the river to the Shadeland/Elston area. There is a pretty wide shoulder, and I can block out the sound of the cars screaming past and just casually ride up the long hill. Today, however, I was pushing along when a car full of teens yelled like hillbillies as they passed. I was able to look cool and give a wave back, but I was actually scared shitless. The adrenaline was pumping like crazy, and my skin was covered in goosebumps. I think the little hairs on my back were standing up as well. 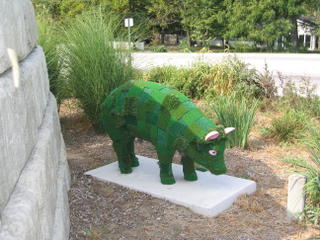 A fiberglss pig covered in astroturf
After cresting the hill and crossing SR25, I turned east onto 350S. The beginning section – between the “new” US231, across “old 231”, and on to 9th street – is still a peaceful ride. However, as one continues east, much commercial development is encountered. There is a CVS drugstore where the old Four Square Christian Church (affectionately called the ‘compound’ by my wife and I) used to be. Plus, gas stations, restaurants, an ice cream store, a gym, and medical offices have popped up all over. Construction will start on the area’s 3rd Wal-Mart at 350S and Concord soon. It is also expected that the state will take over the road as a new route for SR25. This is all in an area that was farm fields and gravel roads 10 years ago.

I took a short jaunt north on US52 (again ignoring the speeding traffic) to get to Ross Road and the Ivy Tech Lafayette campus. The campus was started when Tippecanoe County donated the Ross Sanitarium and the surrounding land to the school. The Sanitarium was built as a tuberculosis treatment center, and a conversion in the late 90’s turned it into the school’s administration building. I had my breakfast (PB&J sandwich) while sitting on a bench in the shade. 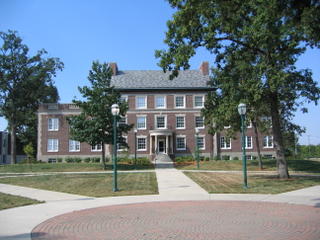 Ross Sanitarium
From Ivy Tech, I headed east and north on Creasy Lane. This is another road that popped up in the 90’s. It is said that the right lane in each direction is a little wider than the left to accommodate bicycle traffic. I think they are including the gutter that is peppered with big drain grates as the bike area, but I’m not riding there. I probably pissed off many drivers as I passed a car dealer, Sam’s Club, Don Pablo’s, Lowes, and a fire station. This is a busy commercial area.

At Greenbush Street, I turned west. The area between Creasy and US52 is under construction, but the rest of the distance was very calm. The northside is a working class neighborhood that has gone through a metamorphosis in the last few years. Neighborhood pride is high, and the residents keep things looking good, such as hanging plants on utility poles in the area.

A little ride up Ninth Street brought me to Canal Road. I took it south and jumped onto the Wabash River Heritage trail under the Harrison Bridge. This took me back to the train station at Riehle Plaza (where I’ll be in the trombone section for tonight’s season ending performance of the Lafayette Citizens’ Band). 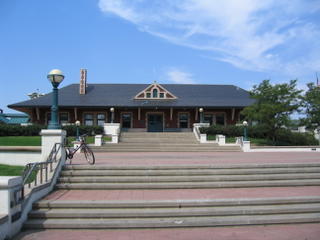 Riehle Plaza
I shot up State Street hill, through campus to Newman Road, back to Division and home.