Sometimes even a bad ride is not so bad.

I was driving up to William Henry Harrison High School to drop my son there for a Marching Band trip to participate in a parade, so I decided to throw the bike in the van and start my ride from there. (I had to drive around to the other side of the building so my son’s friends wouldn’t see me in the bike shorts.)

Things could have gone better. I thought it would be neat to follow Charlie Meyer’s Brookston Bakery route from his book, and I studied it before I left the house. I was almost to the school when I noticed that I hadn’t brought the map with me. So, I decided to instead follow the 30 mile route from the recent Wabash River Century Ride, since the routes all started at the high school this year, and the markings were still easy to see. It would have been easier had I looked to see which color marking went with 30 mile route. I had no clue, so I decided to try the Brookston route by memory. 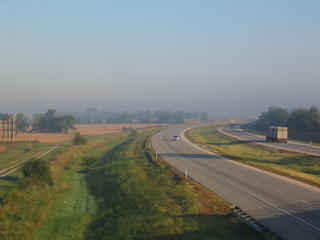 I-65
I didn’t do too badly, although a couple of problems marred the ride. I was over half a mile out when I noticed that the sensor for the odometer was not aligned with the magnet. (I rounded up half a mile in the final distance to compensate.) The seat was a bigger problem. I’ve been having trouble with it coming slightly loose and squeaking as I ride. Apparently, when I last adjusted it on Thursday, I set the horn up too high. By two miles in, my entire ‘swimsuit area’ was totally numb. I tried changing my position, but I finally just gave up and rode on in discomfort. (Man, I am such a whiner today!)

My memory of the route must have been OK, because I found Brookston without incident. I couldn’t believe all of the garage sales that I saw – almost every other house. It was when I reached the highway that I realized why. This was the weekend for the Apple-Popcorn Festival. 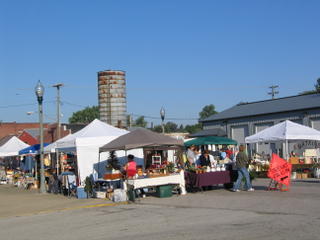 Apple-Popcorn Festival
It’s kind of weird that they couldn’t choose a single agricultural product harvest to celebrate in this little town, but I don’t think they care. In addition to the endless lawns filled with used crap, there were two or three blocks of craft booths, non-profits selling snacks, and carnival entertainment. Someone was setting up a Strongman Game – where one hits a lever with a large hammer to try to ring the bell – as I rode to the convenience store.

I went in to get a drink and a square donut (as advertised above the door). Mine was more like a loose spiral. It was when I was in line to pay when the tingling started. Areas that had been deprived of blood flow for the last 30 minutes were being resupplied, and all of those little capilaries sprang back to life at the same time. Now that’s invigorating!

As I left town, I ended up following the route of a something-K run. As the runners turned left, I continued south on the chip-and-seal road (100E). I noticed that it was turning into less seal and more chip. By the time I was a mile down the road at a ‘T’ intersection, my road and my two choices were all gravel. I turned west on what I later learned to be County Line Road, and went two miles in soft gravel – cursing and complaining the whole way. I was very happy to see pavement at 300E.

When I got to Springboro Road, another cyclist came by and asked directions. The only roads I knew were the gravel mess I left behind, and the path he had just traveled (Tyler Road towards Battleground), so I wasn’t much help. We had a nice, short chat and each went on our way. Tyler Road soon crossed 900W and then met up with Pretty Prairie Road, so I was back on the Cairo Watchtower Route from May, at least for a short while. 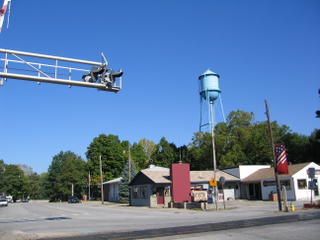 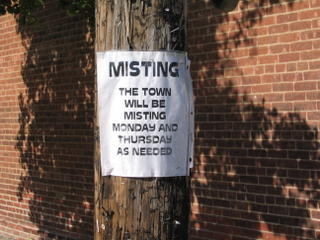 The hill on Prophet’s Rock Road that continues up 600N has to be the steepest I’ve ever climbed – maybe even worse than the uphill on 500W north of Division Road. I made it, but I was panting like crazy at the top. 600N took me back to County Farm Road and the high school. By that time, I was feeling pretty good.