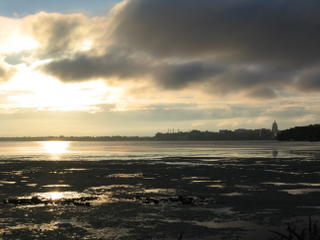 On this last day of my conference in Madison, WI, my goal was to take a long ride along the southwestern edge of Lake Mendota. It is too big to circle in my allotted time, but I could run up and down the bike path that apparently runs up that section.

First, I think there was too much merry-making the night before, and the escargot and gin that I ingested made it difficult to wake up in the morning. I finally hit the road at 6:30.

My map showed a bike friendly route over city streets that would lead to the desired trail. I found every other street in the area except for that one. In desperation, I stopped to ask the attendant of the parking lot that seemed to be where the street should be. (The parking lot didn’t look new, so I’m questioning the recentness of my $8.95 map.) He had no idea, but pulled out a different map that didn’t show that street at all. He suggested another route that my map didn’t show. When I got there, I couldn’t find that street either.

I gave up and found a bike trail to ride. I took it to its end, and then turned around a came back. The section of trail behind the UW dormitories along the lake was not paved, but packed dirt instead. Because of the dry weather Wisconsin has been having lately, the surface was easy to navigate. However, I’d hate to be there right after a rainstorm. Anyway, the trail ended near the Student Union, and I took city streets west past the Capitol to the point where Johnson and Gorham streets merge back together (or split apart – based on your point of view), and then I came back on Gorham/University to my hotel. Once again – the bike lanes are great! 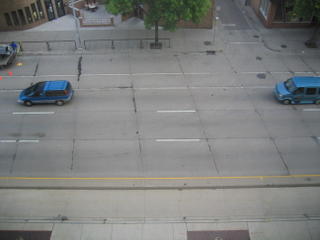 Just an hour today, but I felt much better at the end than I had at the beginning.