All over campus, preparations are under way for the Notre Dame game this weekend. My rare after work ride took me by the band practice field, where the All American Marching Band was prepping for Saturday’s show. 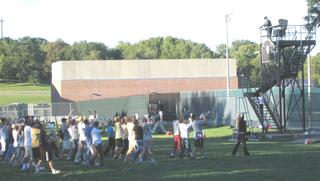 Soon after, I came upon Ross-Ade Stadium, where crews were installing lights, food trucks were delivering concessions, and the groundskeepers were doing their thing. On the east side of the stadium, a marble crew was putting the finishing touches on the base for the new Boilermaker Statue. 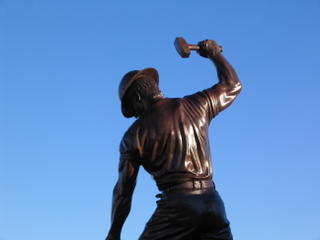 Apparently, some anonymous donor commissioned an 18 foot tall bronze casting of an early 20th century iron worker. Now, the university is trying to figure out how to pay for the base and landscaping required to exhibit it.

As I headed towards the south part of campus, I noticed several tents being erected for weekend festivities. It’s going to be a big day!

My route was basically a reverse River Road/Campus Route – with a little meandering around campus.