OK, so it’s not winter yet, but recent changes to the weather have really messed up my riding.

It is officially too dark to ride between 6 and 7 in the morning. My last morning ride was about 3 weeks ago, and it was pretty dark for about half the ride. Now, it is positively black that early in the morning. Living in the country where there are no street lamps, the neighbor and I are too worried about not being seen – or expected – on the road.

So, my rides now will be limited to weekend daytime, or the work commute. Like today, where I took the South Work Route. The ride in was fine, with a tailwind and me in my long sleeved Oxford shirt and khakis. However, when I changed into my bike shorts and T-shirt for the ride home, I discovered that it had turned cold and windy. Even though I was heated up by the time I arrived home, I could have used long sleeves.

Here are a couple of pictures of the relatively new bike path along State Street that I mentioned earlier. (Look how gloomy it was this morning!) 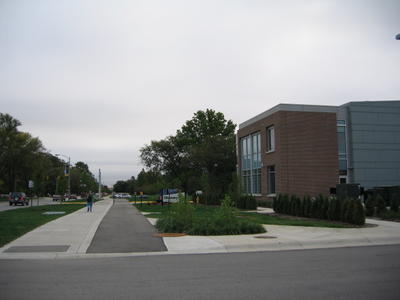 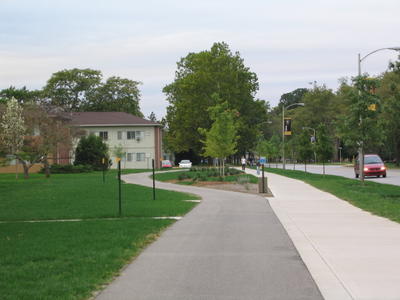 It’s only a long block long so far – from MacArthur to Intramural – but I hope they extend it at some point, especially to the west.