Black Rock is a small outcropping on the banks of the Wabash in Warren County. According to my Charlie Meyer map, it looked reachable in the two hours I had this morning before the rain started. Plus, a strong SW wind was forecast for today, and the rock is in that general direction. 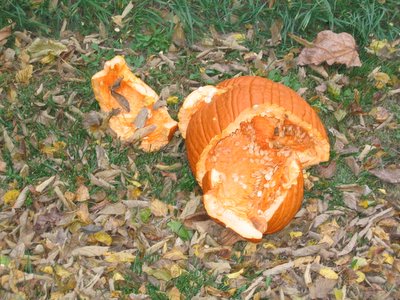 Another Senseless Post Halloween Tragedy
It’s an easy route. Division Road west leads across the county line, and a few miles south of Green Hill the gravel road leading back east to Black Rock is found. The wind wasn’t very strong when heading west, but I sure could feel it when I turned south. 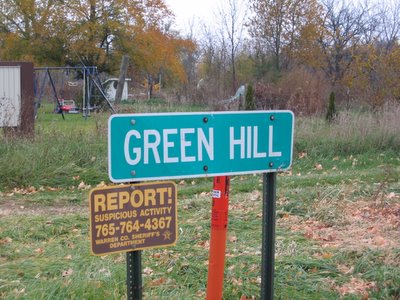 Green Hill is apparently a high crime area
At that corner, I came upon a very large llama farm. I could see the herd in the distance, but they were as camera shy as those I’ve been trying to see closer to home.

Calling Warren Co. Road 350N a gravel road is a compliment. It seemed to be mostly packed dirt to me. There were ruts worn into the surface both from vehicles and from water flowing along the edge. I’m glad the ground was basically dry, or I would have been in a real mess!

The road suddenly drops into the river valley, and Black Rock looms on the right side. It isn’t a very dramatic sight, but in an area of mostly flat prairie land turned to farming, any kind of exposed rock is rare. With all of the fallen leaves and the overcast skies, it was a little tough to see the actual rock. 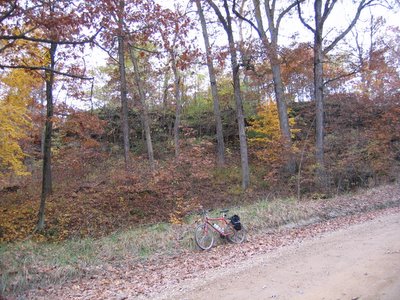 Black Rock
(It’s there – above my bike – look closer)
Some of the land along the river here is owned by the Niches Land Trust, a group that buys land and holds in it reserve. A few years ago, my family drove out for a visit, and we saw a bald eagle and its nest. Another rare sight in Indiana. 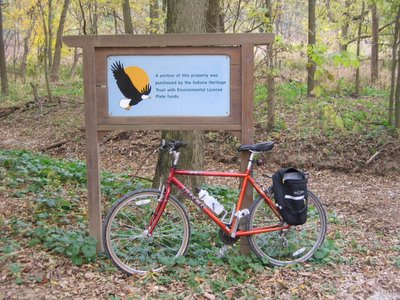 Your License Plate Money at Work
I stopped at the Niches pull off point and ate my PBJ sandwich and some snowflake shaped Ritz crackers (which have eight points, while everyone knows that a real snowflake is six sided).

The road returned to pavement as soon as I crossed back into Tippecanoe County, so the rest of the ride was easy going. I didn’t get much of a push back east from the wind, so I think I earned all of the miles I rode. 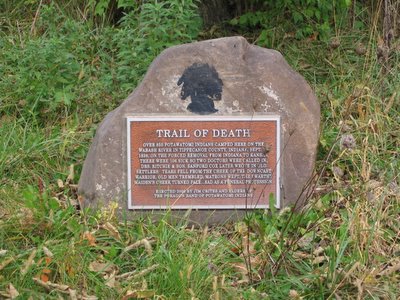 On the way back, I stopped at the Ross Camp to grab a shot of the chapel there.